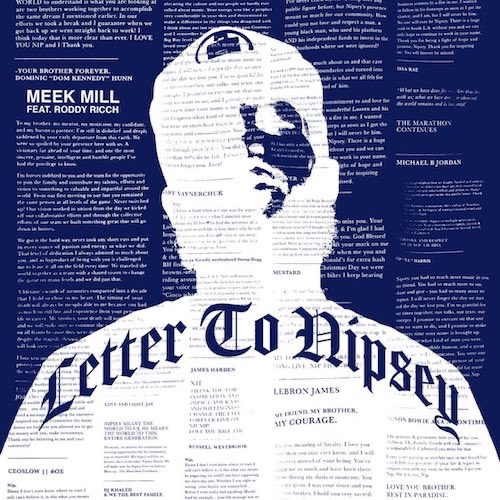 Meek Mill has dropped off a new track alongside Roddy Ricch honoring to Nipsey Hussle. Aptly titled “Letter to Nipsey”, the single arrives after a homage-filled GRAMMY ceremony that celebrated the life of the late rapper.

Meek Mill has shared that all proceeds from the song will go directly to the late rapper’s family.

Sunday night during the GRAMMYs, Meek Mill debuted the song as part of a wider Nipsey tribute. “And I ain’t finna sit here and act like I’m your main homie/But when we lost you it really put some pain on me,” Meek Mill raps. “Got me scared to go outside without that thing on me/When everybody went against me you ain’t change on me”.

Roddy Ricch follows this up with a similar sentiment, speaking on how Nipsey changed his life, his reaction to the late rapper’s death, and more.

On top of Nipsey being posthumously honored tonight, he — alongside Roddy Ricch and Hit-Boy — also took home a GRAMMY for “Racks In The Middle”, with Hussle’s family accepting the award on his behalf.