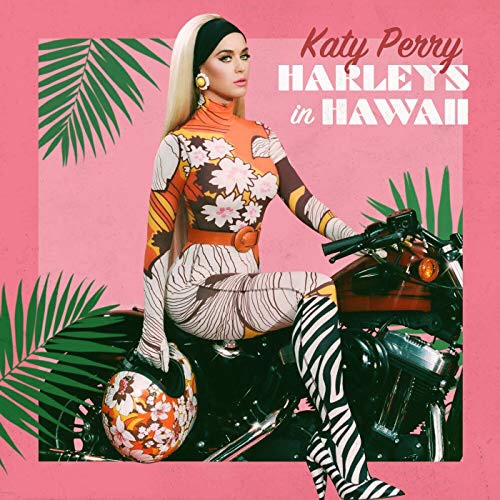 2019 has been a busy year for Katy Perry when it comes to new music, and while she hasn’t yet announced a forthcoming album, she keeps the tunes coming with latest release “Harleys In Hawaii”.
The pop star’s new cut is decidedly cooler than the two that preceded it, and while not much about the music specifically says “Hawaii”, Katy Perry does slip in plenty of references to ensure the audience remembers the setting. The tune begins with an acoustic guitar riff, but it quickly falls back on slick pop production that helps set the mood and which makes the listener groove.

“Harleys In Hawaii” is certainly fun and sexy, and it fits into a landscape that’s been dominated recently by hit singles fronted by trap-leaning pop stars Halsey (“Without Me”) and Ariana Grande (“7 Rings”) without borrowing from them too heavily. Katy Perry’s latest doesn’t immediately jump out as one of the biggest songs of the next few months, but it feels more at home in 2019 than anything she’s delivered this year.

Co-written with fellow pop superstar Charlie Puth and her “Small Talk” collaborators Johan Carlsson and Jacob Kasher Hindlin (Puth and Carlsson co-produced), the track works with her last releases (while also showing she can tackle many different types of pop), which suggests the singer isn’t just sharing one-off cuts, but is likely ramping up to a new full-length.

“Harleys In Hawaii” comes just two months after Perry’s latest solo single “Small Talk”, which was unveiled in mid-August. The track underperformed, peaking at No. 81 on the Hot 100 and disappearing the following frame. That song’s showing is in stark contrast to her previous effort “Never Really Over”, which entered the singles chart at No. 15 this past spring. The cut wasn’t able to break into the top 10, but it did live on the ranking for a long time, earning its status as a proper hit.

In addition to her trio of solo cuts, Katy Perry has also featured on singles by Zedd (“365”) and Daddy Yankee (“Con Calma”), both of which also reached the Hot 100 in 2019. “Harleys In Hawaii” is expected to serve as the third official release off Perry’s upcoming fifth full-length, though she’s been dodgy when it comes to the topic of another album. Her last release, 2017’s Witness, will turn two and a half soon, and with three tracks already out, it wouldn’t be too surprising if the singer made a formal announcement sometime soon.