On Bhovamania, AKA addresses matters of the heart, mind and soul over EDM, Afropop and house music. He taps into an array of samples and clips tailored around the theme of wrestling in a way that’s both nostalgic and cinematic.

“There’s a lot of electric guitar on the album which is very much in the style of vintage WWE wrestler entrance themes,” he tells Apple Music. “I tried to play on that throughout the album to give it that kind of texture and all those wrestling clips gave it that feel.

In hip-hop you project a persona, sometimes get stuck in character and become a bit larger than life with all the drama and over-the-top-ness. That’s what the parallels between the two art forms are.” Here, he talks us through each track on his conceptual EP below.

“Bhovamania is the first conceptual project that I’ve made—based around a concept, aesthetic and construct. The first track is obviously called ‘Intro’. I wanted to make something influenced by my love of WWE. Something based on the showmanship of wrestling, the drama and all the things I love about it. This intro really works as a kind of epic start to open this journey we’re about to go onto. It reminds me of something out of Troy. This is like an armada setting sail. For me, it’s trying to make it as grand and over-the-top of an intro as possible”.

“This song is really what kicks off the EP. I called it ‘Casino’ because I’ve always had this kind of fascination with how a casino represents how people live. It’s about taking a chance and how people think they can better their lives at the roll of a dice or the spin of a wheel. So basically this song really talks to conquering everything, kinda taking everything off the table. It’s most probably my favourite song. I’ve always been a big house and dance music fan and that always creeps into my music. The sound is just based around an epic, kind of haunting sample. I managed to blend amapiano bounce with a trap-sounding beat and a dance music sample. For me it’s three genres in one, which I’m very proud we managed to get.”

“I like to have energy in my music because when I make music I always make it with performing in mind. This was a record I thought needed that energy. I think about what feeling I’m going to be able to impress on people when I perform these records, so I kind of make them backwards. For me, this record was an opportunity for us to just lyrically rap. There’s nothing like a good rap song and I think ‘Heavy Drank’ is a good, flex-y rap song. Every project needs something to roll your windows down to. I’ve always thought the best hip-hop is the music that makes you feel like the most badass, coolest person in the world. That’s what hip-hop is about and that’s what this song is saying.”

“I came up with this hook, ‘I’m a lion, I’m a king,’ and I wanted to call the song ‘Lion King’. But I thought, ‘No. If I can call the song ‘Mufasa’ then I can use people’s own thirst for controversy against them.’ So it’s kind of a practical joke with the name of the song but the bounce of the song is so unorthodox. It speaks to how sometimes you have to get down and dirty and do things that you don’t necessarily want to. Sometimes you do it to people in order to dominate like a lion would in a jungle, but the song is also about taking care of your pride: all the people around you.”

“This is a song we made for my friend, collaborator and DJ Don Design. We just wanted to make a really cold summer jam. Makwa 6eats came up with that sample which is also from a dance song. It actually comes from an old Metro FM ad called, ‘What makes you Black’. We thought that would be really nostalgic so I put that in there. I really love the more witty, humorous lines in this song.”

“I always wear my heart on my sleeve and I love a good pop song. I wanted to make a song where I was a bit more vulnerable. When I put this project together, I divided it into three pieces—the heart, mind and soul. The heart is ‘Holy Water’, ‘Energy’ and ‘Monuments’; the mind is ‘Heavy Drank’, ‘Python’, ‘Mufasa’ and ‘Casino’; and the soul is this one, ‘Finessin’, ‘African Man’ and ‘Mr Perfect’, which are all about my current significant other. She was very instrumental in inspiring [the four soul] songs.”

“I wanted a song that would also make women feel a sassiness, like, ‘Yeah!’ Once again, there’s a really good groove, great writing on the hook and great writing in the verses. I hardly work with people in studio but Nelli [Tembe] was there and even though she has no visions to be any sort of artist in my world, I think she absolutely killed it and the delivery was sick!”

“I’m a big Christian, but I’m not the most Christian of Christians. I wanted a song that I could feel like, this is God’s [song]. I wanted to make something that was spooky and moving, with organs in the hook. In the verses it’s really about repenting, going through shit that’s difficult, being misunderstood and then feeling like you’ve just gotta wake up in the morning, bow your head, pour that holy water over it and get up to start your quest or whatever challenges you’re endeavouring to start on.”

“More house music! This record was also made by Makwa 6eats. There’s about four or five records on this project that we all went to Cape Town for—myself, Makwa and Gemini Major. We took all our gear to Cape Town and we would sit there—‘cause I like recording in hotels not in studio—going through samples and going through drums. I’d make a piece here, cut a sample and Makwa would do the drums. That’s how we pieced the music together. On ‘Energy’, Makwa had just cooked this beat up and myself and Gemini wrote the hook. That first line —‘Knowledge and power, top of the mountain’—is me looking out the window at Table Mountain, so that’s how that came into being. This song is just about a kind of supernatural feel. It’s kind of like coming out of your own body.”

“I’ve always wanted to make a really hardcore hip-hop song. I had never done a record with scratches on it and I thought to myself, ‘I’d like some cuts. That’s the essence and core of hip-hop.’ I was able to reach out to Grandmaster Ready D and I’m happy that I got one of the greatest turntablists in the world. This song commemorates this moment in time. I made it just as lockdown started so this song comes from a place of being cooped up—you can hear it’s very isolated and insular. When lockdown started, it was time to reintroduce myself to myself and ask myself questions like, ‘Why do you do what you do?’ ‘Thinking to myself what’s the reason that I even started making music in the first place?’ is the key line of this song.”

“At the end of the day this is a South African rap album and I definitely wanted that African feel. I just love that this song references Bongo Maffin, Mafikizolo and Mahlathini & The Mahotella Queens. It’s a real African record and once again, it’s matters of the soul.”

“This was made towards the end of all the sessions in Hartbeespoort Dam. Before, everything was bare and then we put in the band for all the guitar riffs and stuff like that. I wanted it to be very ‘80s and have a looseness and groove about it so Naak MusiQ and Yanga came around to add things. I told Yanga, ‘I’ve got something, please write for this.’ He sat down and wrote his verse and absolutely killed it. Same with Naak—I really liked his vibe and we came up with a really cool bridge for it.”

“This song, more than anything, is for me and my satisfaction. I thought at the end I would just make a song that I could just flow over and get off all my cool little lines and say whatever comes to mind. I’ve never made it a point to be overtly political but I’ve always left room to express myself on a certain topic if needs be. I don’t want to ever be seen as a socially conscious rapper ‘cause I think social commentary should actually belong to everyone.

This song, and the length of it, is also meant to be like the end of the movie. I put the Hulk Hogan clip in to make it more poignant with an extra long drag out.” 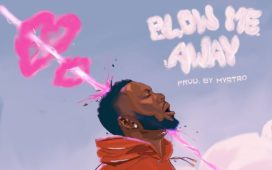 Mystro – Blow Me Away 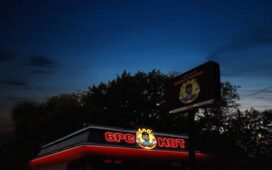 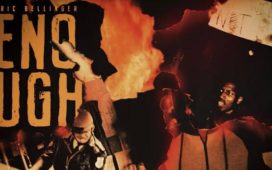